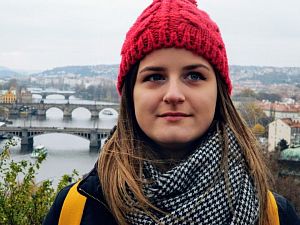 Back in high school, the attributes I would have used to describe myself would be – introverted, a little naïve and just a tiny bit timid girl with a lot of unused potential, hungry for adventure and eager to do something grand, from the country that all the bad guys in movies are from and with a bad reputation among the rest of Europe.

Katarina comes from Serbia and currently she is a student of master progamme International territorial studies at Mendel University in Brno.