Why did I choose the Czech Republic

Hello! My name is Jacob Rak and I am an American student studying film at the Film Academy of Miroslav Ondříček in Písek. I just recently began my second year of studies in the Czech Republic and am already excited to see what opportunities this year will offer. You may be wondering though, why did I choose to study in Czechia and not in my native country, the United States? Well, it’s a long story. 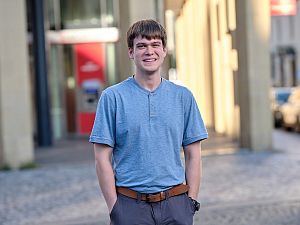 After taking some time off from learning to explore my possible career choices, I finally decided that I wanted to make movies. I already knew a number of people who were studying to become filmmakers back home-they all would talk about moving to the “Big Apple”, New York City, or to the “City of Angels”, Los Angeles, where Hollywood, the film capital of the world (arguably) is. I easily could have followed those people, like thousands of others do, but I decided that I wanted something different-I wanted to do something no one else was interested in doing. It just so happened that one day, as if it were summoned by the inner-will of the universe, that I came across a flyer advertising FAMO, the school I currently attend.

After researching FAMO and discovering that the Czech Republic has a large, international film industry, I realized that this was my chance to do something different, something no one else is doing.
It is important to mention that there are many other, more “practical” reasons why I chose to study here in the Czech Republic. Coming from a country where most students are constantly looking for that “edge” to put themselves above the competition when looking for a career, I realized that by studying in

Czechia I would be offered many opportunities that can’t be found at domestic universities; opportunities like immersing yourself in a foreign language and culture, meeting and collaborating with students from everywhere in the world, and making lasting connections with people locally. From what I have heard, many employers in all professions look favourably upon what they call “experiential learning” or “educational adventures”. You already are putting yourself ahead the crowd if you can say to a potential employer, I studied and lived in a foreign country for several years. In many ways, an experience like that can act as proof of your skills, experience, and personality.

And so, that is how I ended up in the land of the Czechs. If you want an “adventure” like I talked about, the Czech Republic is the perfect place for it! With an environment friendly to international students from all over the world and many opportunities, Czechia is a great place to begin any journey.