Stay at home or study abroad?

I was getting the same questions from people in the Czech Republic over and over again. "Was it hard to leave your home for studying abroad?" I don't think I would do something like that. Erasmus in ok, but actually living in another country..." It really depends. 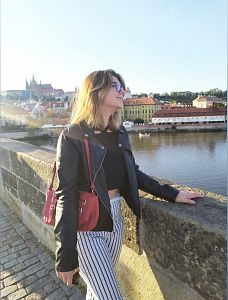 I can tell what was it like for me. I love my family, pets and friends, but studying abroad was my dream since I understood that is an option. If you have already decided that you want this you can't really look back or be lazy. There are a lot of people who go abroad, so studying or working here becomes quite competitive. And it is challenging to be not only better than other foreigners but better than other Czechs. They already have an advantage - they are speaking their native language.

So if you are here you have to work twice as hard as you'd work in your own country. Also, many people think that studying in Czech is for free and they'll spend less money, but in my personal experience, the cost of language courses, accommodation and visa expenses are even more, than l could've spent at home (in Ukraine). Right before getting my visa l had some second thoughts. I had a group of close friends and almost all of them were going to study in a big and beautiful Ukrainian city. So when I received a call from the same university my friends entered and they had told me that one of the budget places is mine I was thrilled.

Two days later I checked my email and there was a letter from the embassy. The emotions that I felt at that moment gave me an answer. I was a step away from my dream. Friends and family gave me all the support I needed. So I jumped. And now I am here it feels like the right thing. It a lot harder than I expected and I am struggling every day. But I am exactly where I wanted to be since childhood. Even for these half a year I learned so many things, experienced so much and met an impressive amount of different people. I doubt that there would be so many chances if I had rejected this opportunity. So I am happy where I am right now. Are you?